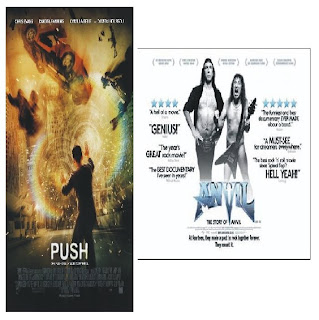 Push is pretty much OK, until the last fifteen minutes when you realise that its 'the first part in a planned trilogy' which, due to this film being not that much cop, will never be made. Now I'm not going to cry into my post cinema Creme De Menthe, which Luigi my drinks waiter has kindly and expertly prepared, over the loss of Push 2 and 3. But I could probably have done with knowing this at the beginning, which would have informed on my choice to waste 2 hours of my time on a story that won't end properly. On a more positive note director Paul McGuigan again sees fit to litter the film with his own personal trademark, that of really terrible wallpaper....everywhere. This cat is a bargain bucket at Homebase's wet dream. And a warning for those of a perverted nature, wear your industrial sandpaper kecks - Dakota Fanning is not yet pedo bear approved.

Anvil is what would be referred to as 'a triumph of human spirit against the odds', except no one really triumphs. It is however funny as fuck and proves that however much you believe in yourself you will still be shit if you are. Also rock/scat fans should however look out for the painting scene which is the funniest thing I've seen all year. Maplethorpe would be proud.
Posted by Society Red at 05:16