This Week In Film/Verbal Diorama 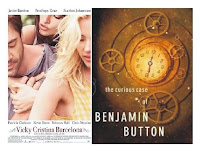 I'm going to do both films at once for some good reason. Benjamin Button is brilliant, so brilliant in fact that after I finished watching it and was waiting outside for my driver Pepe to pick me up in the town Bentley, I could not for the life of me remember what the first film was that i went to see earlier that day. Eventually I rummaged around in my pocket and found a ticket stub to find it was Kinky Christian... or whatever. And the thing is, the first film featured Scarlet Joehansome gubbing into Penelope Pitstop and I had completely forgotten about it. Three choices 1) early onset mad cow, 2) brain penis blockage (see 1), 3) Benjamin Button is such a well crafted, magical, deeply moving, incredibly poignant film, that just steamrolled the best film Woody Allen has made since Deconstructing Harry, which features chicks winching.
I'm not going to even mention the special effects, because after about half an hour you just forget they're there. Like Nazis always speaking English.

Word of warning - expectant fathers beware. Be prepared for a new nightmare, (to add to the legion of others), where your progeny is born a tiny old pruney dude.

I hope this doesn't sound like I'm blowing smoke up Benjamin Buttons ass, but it also happens to be part of a very rare breed of film now-a-days that actually knows how to end. The closing coda alone is worth the three hours and brings the film full circle in a way that just seems so right.